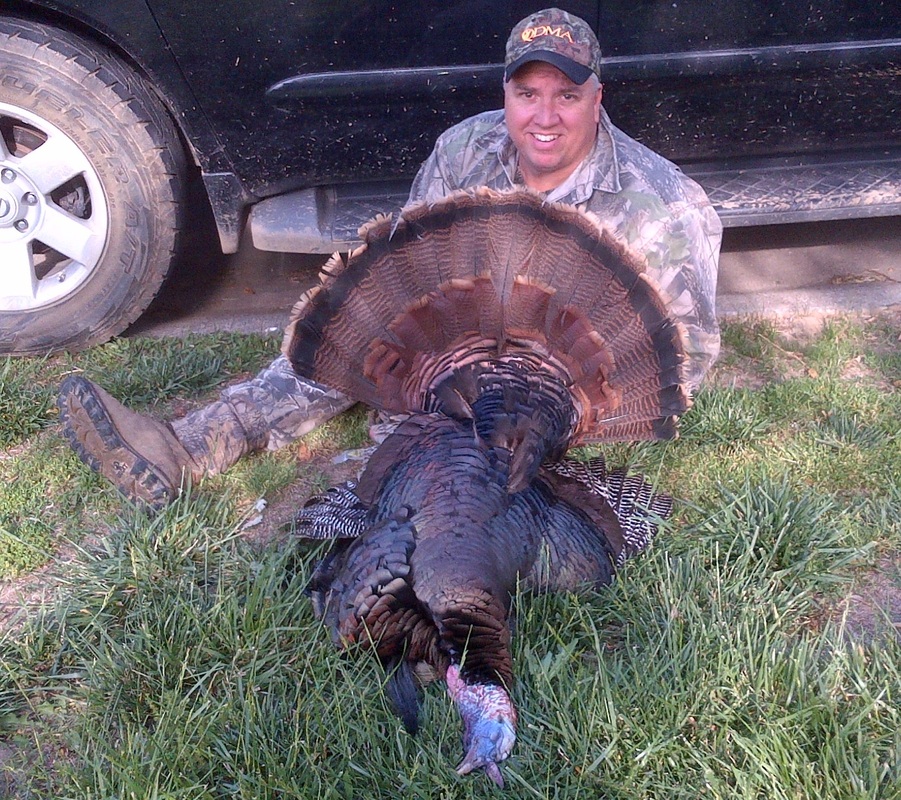 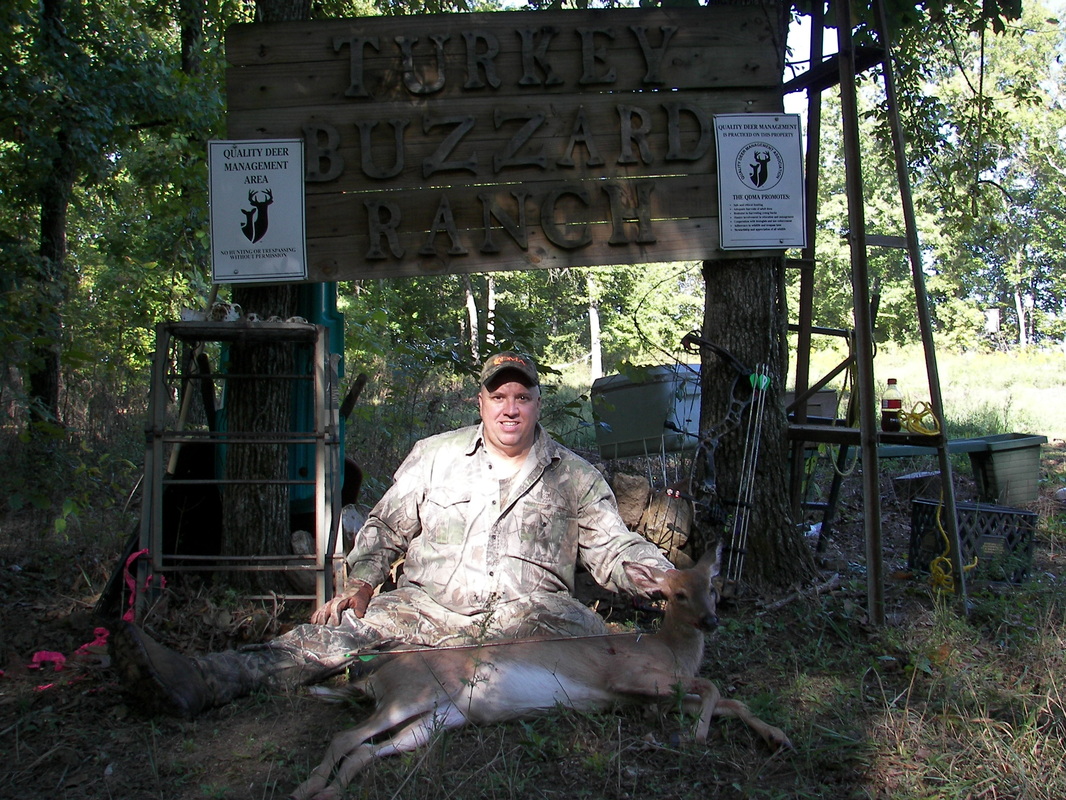 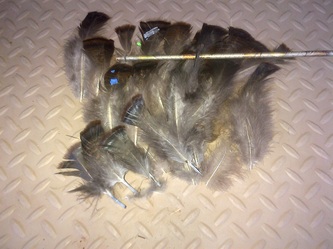 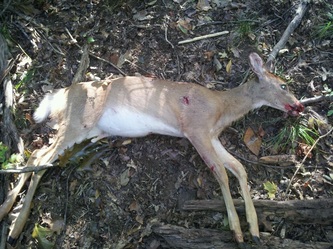 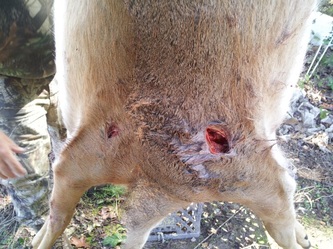 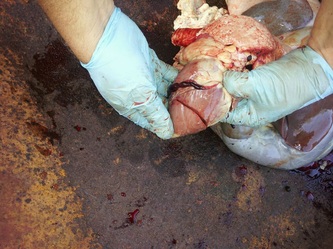 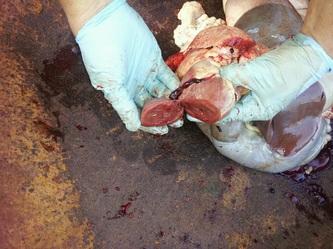 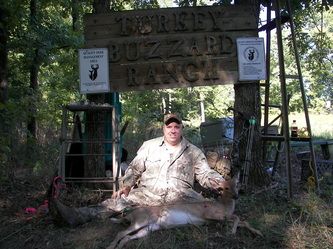 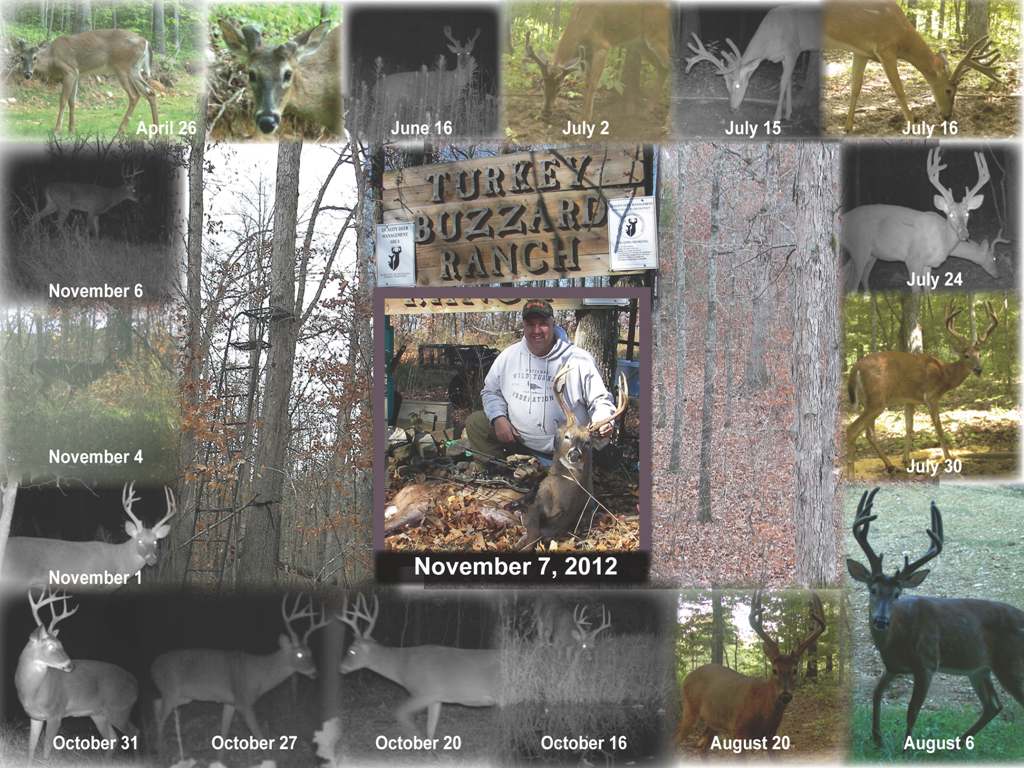 Story start in April when the first Game Camera photo of this buck show up. Started watching him grow his antlers and, as the spring and summer progressed, it was very easy once the one wild tine showed up.

I told my friend Jim I don’t care who gets him, but sure would like to put my hands on his antlers see what all the wild tines look like. The official name given to me during the summer was the Big 12.

Five things help this buck into the back of the truck.

1.       Game Camera watching him through the year and the last daylight photo, giving me a direction to look for him to move and the right place to hunt.

2.       Dr. Grant Woods seminar at the Convention talking about hunting bucks who’s personalities show them as a buck that moves in daylight and dark.

Those five things help me successfully hunt him.

The hunt starts looking at the game camera photo of him on Sunday November 2nd at 9:55 am heading south from my remote watering hole. This makes me think he is bedding down possible somewhere south of that spot.

I took 1 ½ days off from work and on November 7th that afternoon I got into the Bottoms Stands southeast of that location and on where I believe the deer jump the fence.

At about 4:45 pm herd some movement to the south and could see a deer in the creek bed, milling around, I could tell it was buck when it raised it’s head but still not sure which one.

Finally it walk toward the fence, very excited to see what I believe to be the Super 8 a 4 ½ year old buck very tall rack and a shooter on my property. It walked along fence jump little dry creek and stopped. Then it stood and have always been amazed watching a deer jump a fence. That’s what he did from a standing position 30 yards away right over a 47 inch field fence and very relaxed he walk to the raked trail that goes to another stand just west of me. He turned towards me and I thought he was going to walk under stand to the food plot.

Instead he turned again and I pulled back and not shot too many small trees, I pick out a big oak that I had ranged earlier and when he walked into path I shot and I watch the new lighted nock hit the deer and the buck kicked and ran off just out of sight. Did not see my arrow go with him, was not laying in front of tree deer was in front of.

I could hear the deer then walk off and the squirrels on top the hill go crazy. I leaned as far to me left as possible and could glass my lighted nock, which was 3 foot from location I shot, in the direction the buck went.

I looked at my watch it was now 5:00 pm and I was going to wait but not long because I wanted to be able to see arrow, hair and blood I hope.

5:20 pm I climbed out of stand and walked down raked path then walked heel to toe to arrow. White and brown hair, only half the shaft with fletchings, and the shaft had blood half way up.

I then turned the nock off, stuck it in ground and walked back out as quite as I could and took the long ½ mile walk back to truck and called my friend Alan Joe and asked for his help in morning.

6:00 am November 8th we are standing in the spot I shot and started following hair and then shortly the blood picked up and good bright red blood trail, going west north west toward watering hole but then turn due west up the hill went by the big cedar tree behind another stand.

Then over the hill down the other side moving north into the deer sanctuary which is 4 year old timber area that we don’t enter, then the buck did a strange u in direction and turned west again going uphill just below the old logging deck. Along the way you could tell when it would stand still because the blood sign was real good.

Then on the edge of logging road just below logging deck it laid down for a short time, because not a ton of blood but still good sign. Then it got up and crossed road and laid down again for a short time, about the same amount of blood. Then it must had clotted for a short time because could not find a direction but fence is nearby and we went over to it and found blood but at this time we did not know we are going wrong direction.

This did take us to a spot with a ton of blood, could see where it had laid down for long time, But also a ton of tracks like it was struggling to get up or down but a huge disturbance and a lot of blood. We looked and could not find a direction after that, then we put the theory in that we went the wrong direction from 2nd spot it layed down and then found blood going down to 3rd spot and now that took us back to fence and then we knew we had correct direction.

We found a spot with a lot of blood and the buck struggle to get under the field fence, ton of disturbance. Then it turned and started going downhill and found another spot that the buck struggle then jump the 47” field fence and headed to the small watering hole that was dried up and the crows where flying within tree tops having a fit that we are in the woods. I found the last spot of blood when Alan Joe said there a deer a good buck.

Little weird it was all covered in leaves, racked the leaves off with hand and what we believe was a bobcat at part of the back hip. But when I grab the antler I saw the one tine and it was the Big 12 not the Super 8, even though he is now 10 or 11 because of some of the smaller broken tines.

2012 had seen 8 bobcat while bow hunting, killed a 24 lb male with bow and then trapped a 20 lb female. Still had game camera photos of bobcats and know this year I have some large and small ones this year also. Even have a game camera photo of one stalking a doe and yearling.

The theory is the buck laid down at the 3rd spot and would have been there in the morning dead, but a bobcat jumped it there for a quick meal. The deer struggle to get up and made it to the fence and in a panic it tried to go under the fence but antler got stuck and then it went to last spot on fence and struggle and jump fence and died shortly after that. I believe the bobcat was near it at all these location and forced deer in panic trying to get away. Then the bobcat started to eat and when done covered the buck with leaves.

Nice to be able to watch Quality Deer Management pay off with this buck. Live weight was 165 lbs. Age with jawbone to be determined and age with front teeth from lab to be determined. 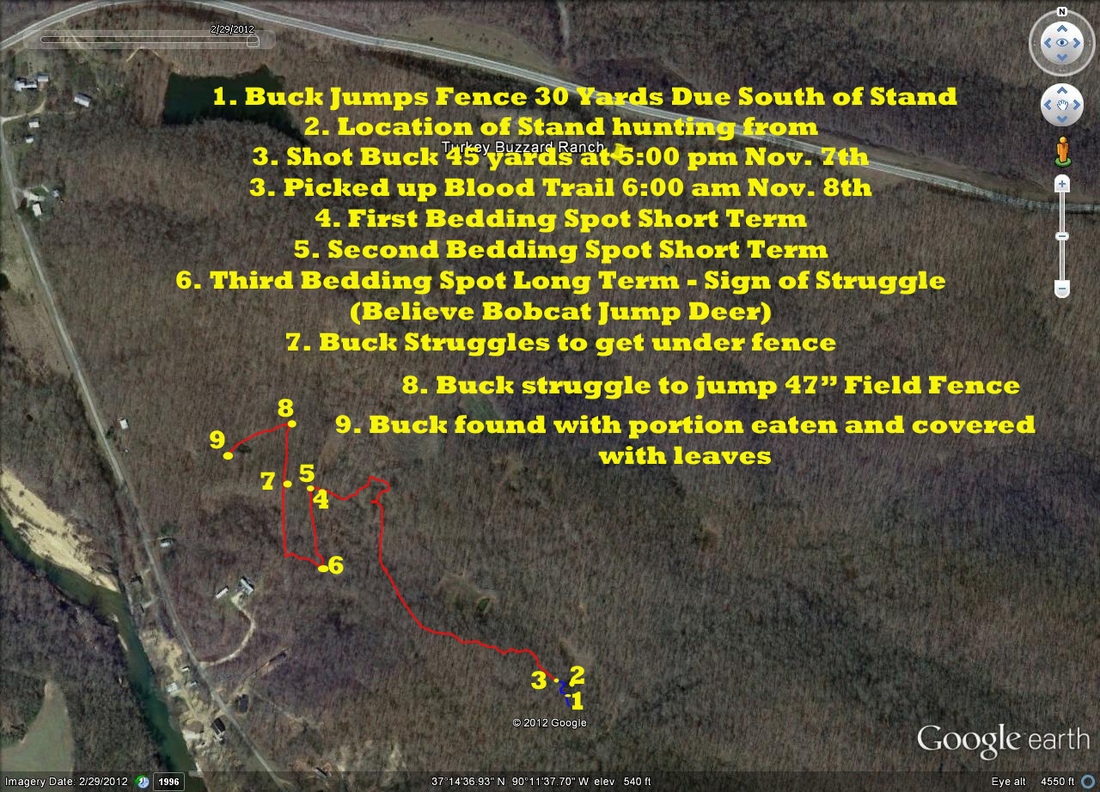 That’s my head on the wall.

All starts December 29th the main food plot looks like my back yard with the dog. Tracks everywhere and coming from every direction. Any stand is just as good as any, when I watch a doe and button buck eating turnips out of main food plot near entrance road while hunting mineral lick stand. You could see the turnips tops in the doe mouth.

So I moved the road stand to behind the first brush pile, the turnips are just being hammer that stick out of the snow. This will give me a 20 yard shot where the doe and button where yesterday.

Well at 4:15 oh my oh my the Super 8 comes out of the sanctuary and starts feeding near the center tree, He is tall in his photos and he even taller in person. He keeps feeding closer until he is on the other end of the brush pile. PS he has a thorn or something in back hoof he shakes it and bites at it and has a small limp.

BAM BAM BAM BAM BAM – Ugggggg – He comes back into food plot at mineral lick stand where I would have been normally. 16 yard shot, should have a photo of him on Game Camera if batteries have not died. He walks along edge getting closer then angling back towards center tree feeding all the way. He final goes back the way he came right back into the sanctuary.

This lasted for over an hour, you could see turnips tops in his mouth. Was absolutely amazing to watch this big antler deer roam around in the snow. He has really gone down on body size and neck size, rutting all over I guess.

Best hunt of the year. But after he left and I got out of stand I sure got cold quick. Nothing like adrenaline to keep you warm. 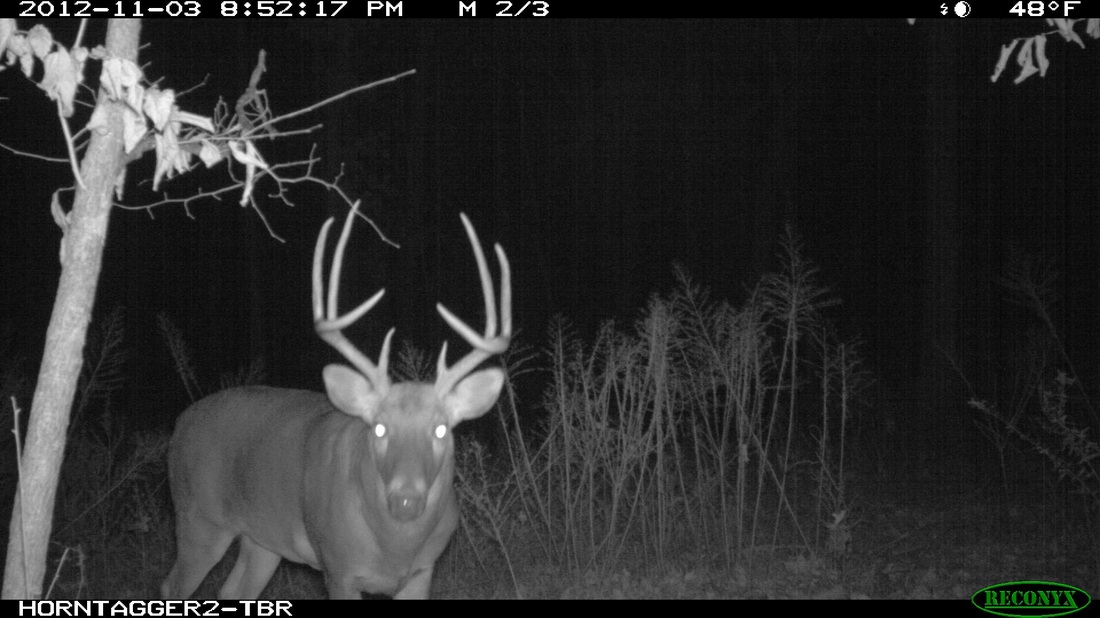 Watched the Super 8 again this time came in at 4:40 pm and stayed till after dark stayed at 60 yards most of the time. If everything holds true and he keeps his pattern still Saturday will move Stand to other end of Brush Pile that will put him in the wheel house if he shows again. 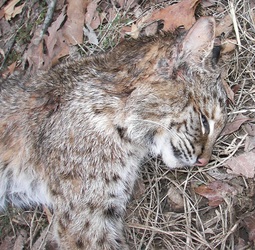 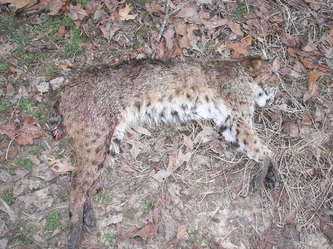 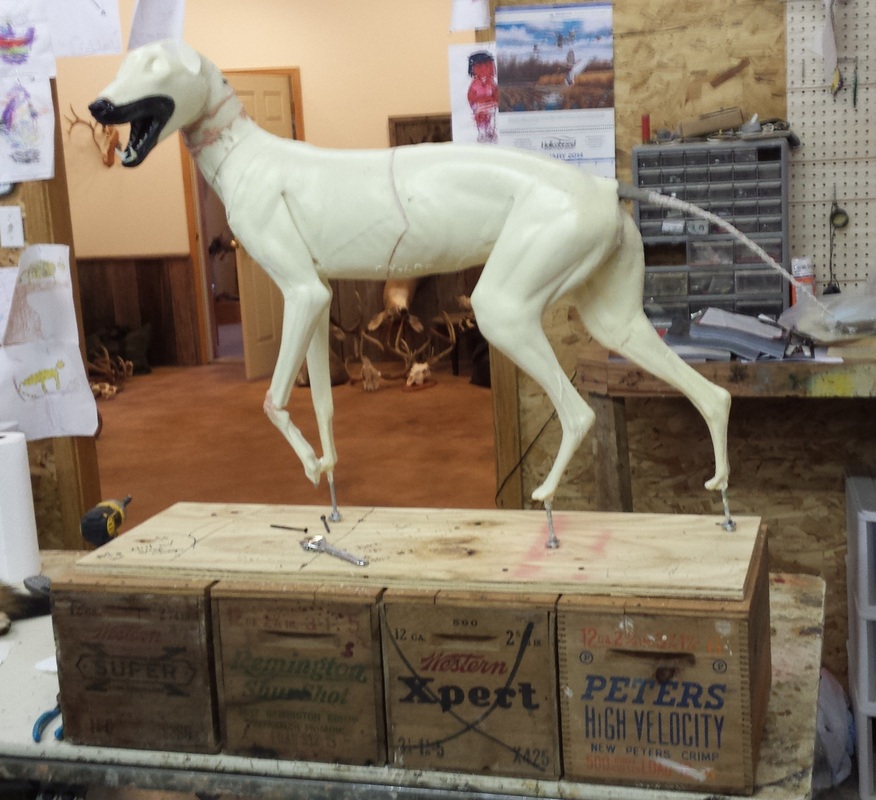 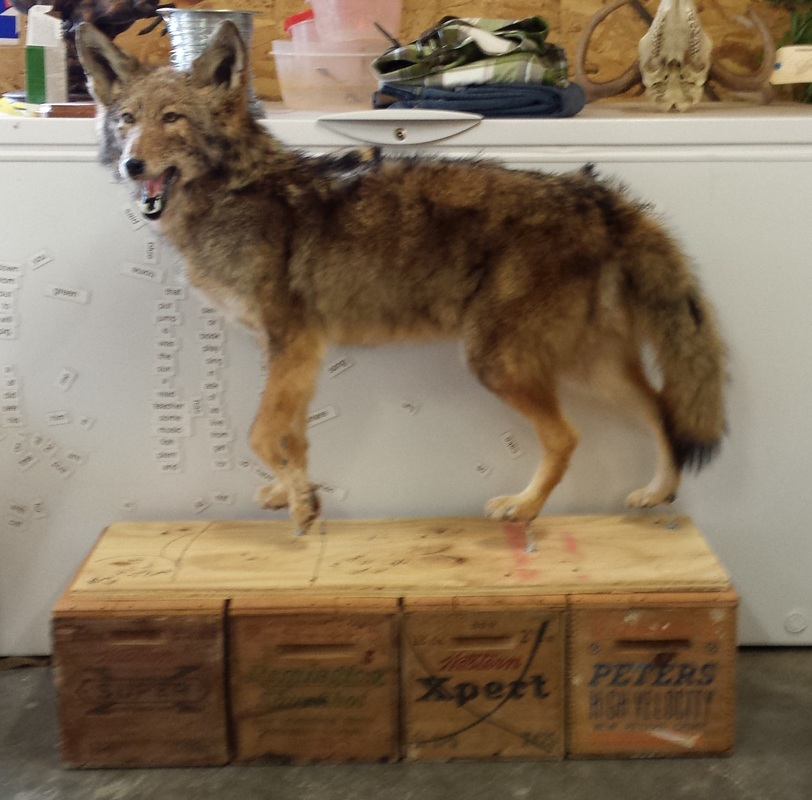 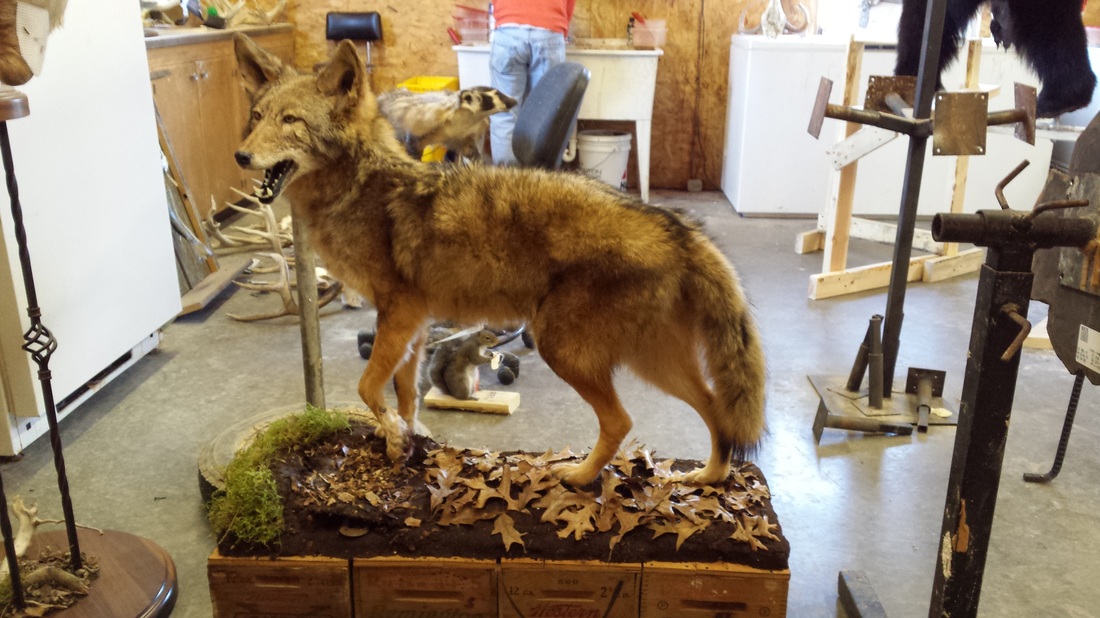 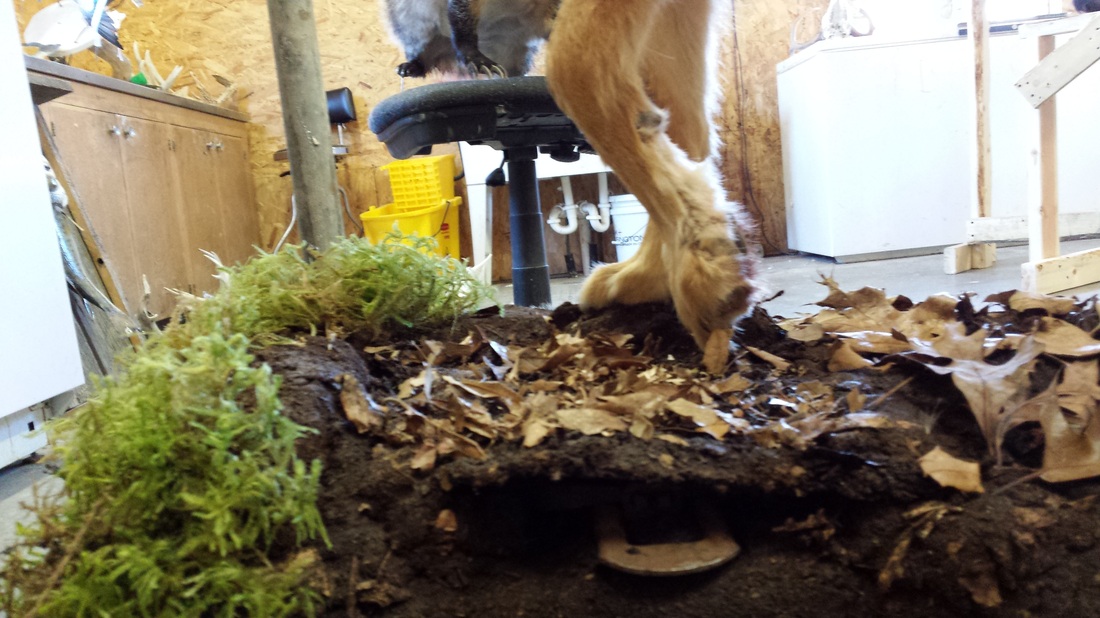 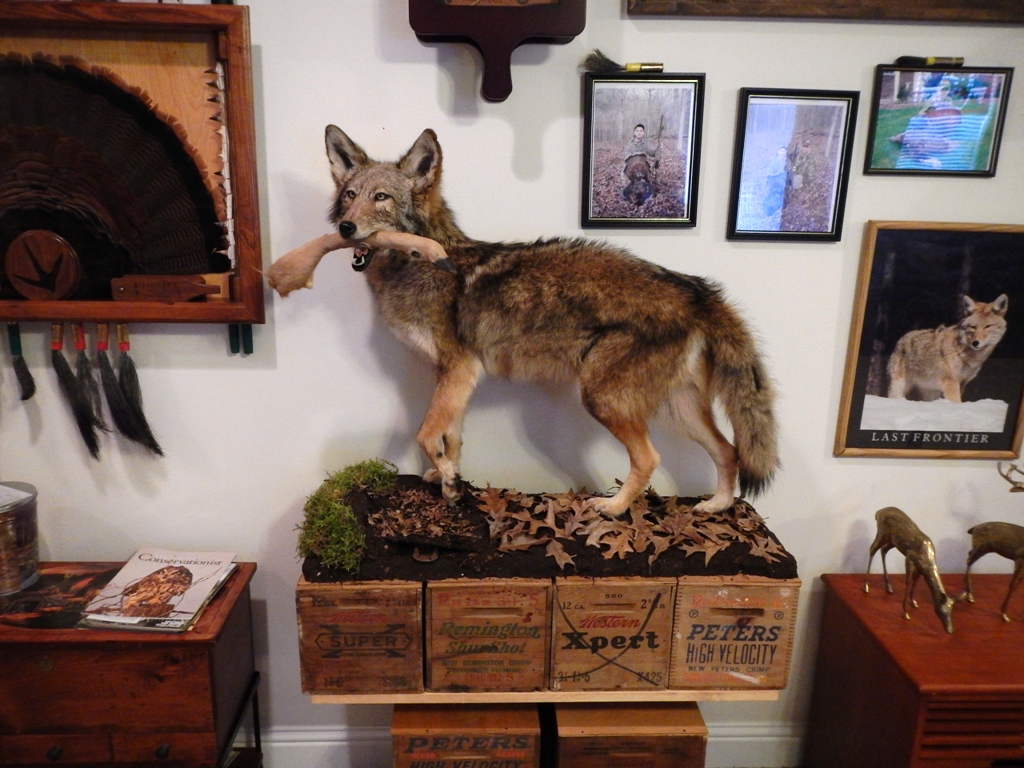 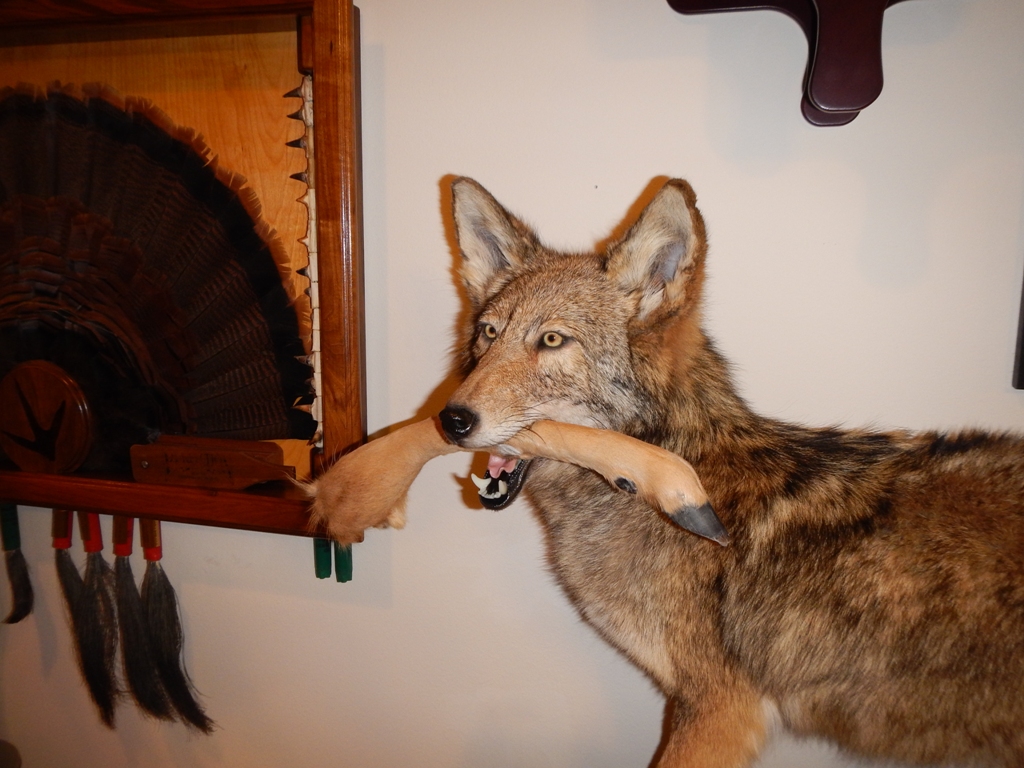 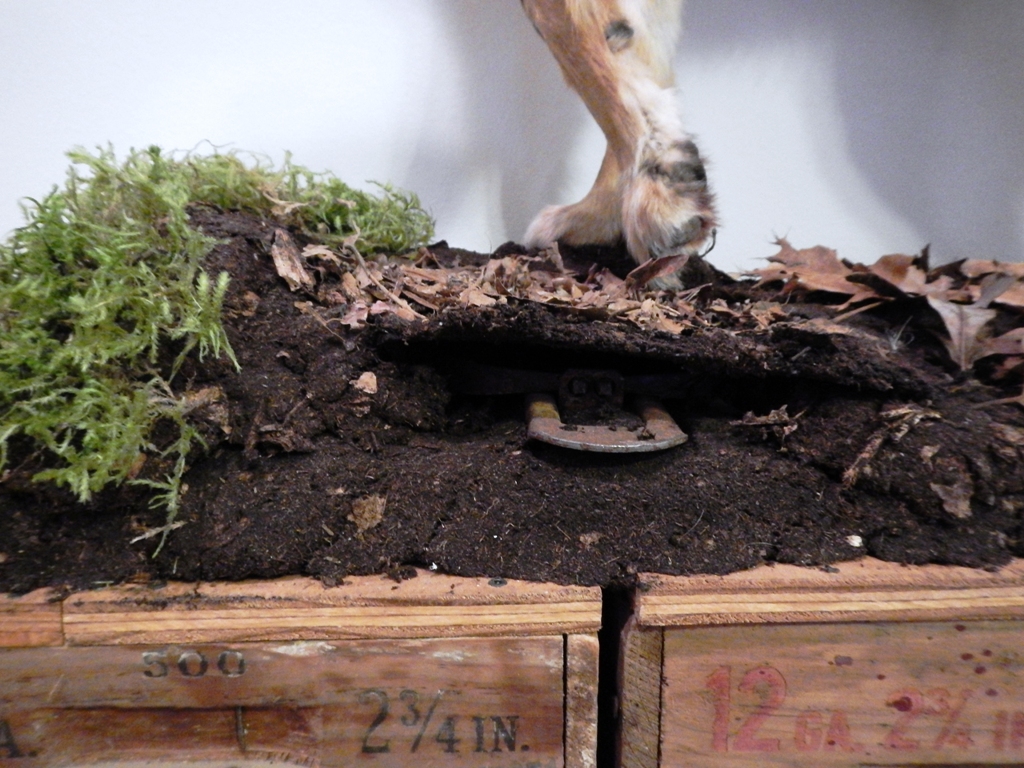 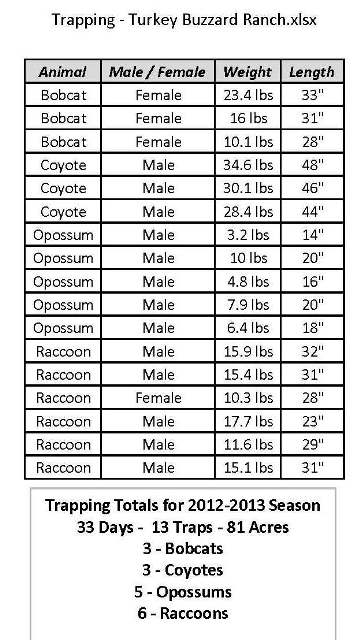