Just some of the people and things I will be covering on August 16th, 17th, and 18th at the 2002 BUCKMASTERS EXPO - HUNTERS FEEDING THE HUNGRY 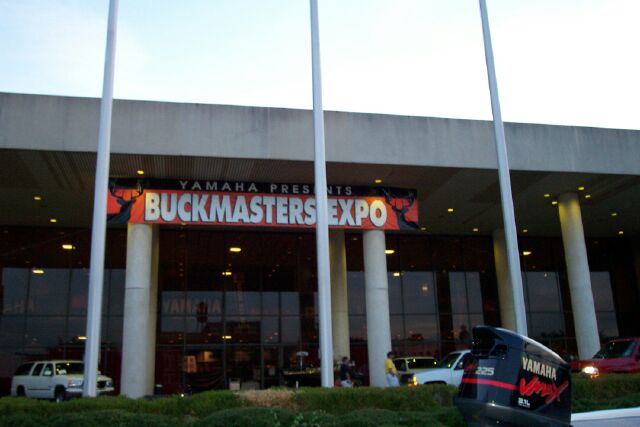 MASTERPIECE
Masterpiece – The greatest work of a person or group. That is the first thing that comes to mind when I think about the 9th Annual BUCKMASTERS EXPO 2002 in Montgomery, Alabama.

No one word can better describe the three day event in which hundreds of thousands enjoyed and visited with some of the top outdoor professionals, product show, country music concert, kids outdoor pavilion, deer scoring, deer scoring class, big buck displays, hunter education course, and top bow indoor world championship. All this for the entry fee of a can of food to support the food bank.

The masterpiece of the BUCKMASTER EXPO 2002, the greatest work of a person and the one to thank for this great place to bring family and friends is Jackie Bushman, who in 1985, at the age of 29 had the desire to unite America’s deer hunters. Standing alone in a booth at some outdoor show, grew a dream into Buckmasters Whitetail Magazine, Rack Magazine, Young Bucks Outdoor Magazine, Buckmasters TV series and much, much more. Including in 1994 the first ever BUCKMASTER EXPO.

Masterpiece of the BUCKMASTER EXPO 2002 is also the greatest work of a group. That is exactly what I watched as the Buckmaster staff kept the possibly 40,000 hunting fans happy with the 3-day event. They are to be congratulated on a job well done, and with this being only the 9th Annual BUCKMASTER EXPO. With the Buckmaster staff manning the front lines of the fight to keep our heritage alive and moving forward, I could see this EXPO becoming one of the largest events in the hunting world in the near future. Watch out Montgomery.

That is how many Americans took to the woods and waters in 2001, and they spent 70 billion dollars. The fact of the matter is, not only are hunting and fishing traditional activities in American culture and history. But we have an economic ripple effect on the Fortune 500 companies as well as the small town family business.

Buckmasters knows this all to well, that is why they invite more than 250 exhibitor with nation companies right next to their local retailer for the visitors convenience. The latest hunting products and each hunter will also have the chance to talk with each product representative, like FLEXTONE GAME CALLS, from Pearl, MS. just one of the many.

But that’s not all some of the country’s top professional hunters in the world are on hand to answer your questions in person. Of course President and founder of BUCKMASTERS - Jackie Bushman, President and founder of WOOD WISE PRODUCTS – Jerry Peterson, Terry Rohm of WELLINGTON OUTDOORS, Kenneth Reeves PRIMOS HUNTING CALLS Prostaffer, Jackie Claude of TEAM REALTREE, Bill Jordan - REALTREE OUTDOORS.

That is what BUCKMASTERS has set a new standard for all hunting outdoor expos, shows and festivals to match by offering so much, for the price of a can of food for an entrance fee to be donated to the food bank.

They have not stopped there, with the increasingly popular and moving into the woods like a firestorm is the BUCKMASTERS TROPHY SCORING SYSTEM.

With hundreds bring in trophies to be measured by the BUCKMASTERS TROPHY SCORING SYSTEM – BTR. The major difference from other scoring systems is that BTR has eliminated the concept of deductions, which often keeps great whitetail deer out of the record books.

This is not made to confuse or to eliminate other scoring systems but to offer a option that will show the respect each whitetail deer deserves. That is what scoring is all about, not to honor the hunter, because the hunter has honored his or her self by just participating in the quest for a whitetail deer whether it’s a doe or buck or to just enjoy the outdoors. The scoring of whitetail deer is to honor Mother Nature for making such a unique animal and to forever preserve the memory of that whitetail deer. That is also all that the BTR system is made to score, just deer.

Also offered during the BUCKMASTERS EXPO 2002 was an official scoring class in which I took part. From 9:00 a.m. to 5:00 p.m. on Saturday, future scorers from around the country learned the art of measuring antlers from some of the wildest whitetails racks around. While taking home a new method and the manuals, video manuals, measuring tapes, cable, scoring sheets to measure possibly, your next trophy whitetail.

While you might have been waiting for your buck to be measured, you could view some of the most assume whitetail mounts in the country on display.

THE RACK That is what you could compete for, if you ever made it to the finals at the TOP BOW INDOOR WORLD CHAMPIONSHIP at the BUCKMASTERS EXPO. What a impressive trophy, I might add.

But if you attended the Expo you could at the very least, get to see some of the most assume examples of shooting with a bow on this earth. On a course that is right out of the woods. This computerized 3-D target system puts the archer through the ringer as much as a one in a lifetime trophy whitetail buck would. While standing 4 feet above the floor on a deer stand taking 12 shots in 45 seconds, at targets ranging from 15 to 60 yards.

The one and that’s all it can be that gets his name added to this trophy rack was Joseph Goza from Flat Rock, Alabama.

But this was not all for the big kids at the BUCKMASTERS EXPO 2002 as the little kids got their very own air-conditioned YOUNG BUCKS OUTDOOR PAVILION. Activities at this pavilion is unequal by none to introduce our future keepers of our hunting heritage to the outdoors, and the respect that goes along with wildlife and hunting safety.

BUCKMASTERS EXPO is for the hunter and his or her family to enjoy. That is why BUCKMASTER is and always will be a living tradition fro the future of hunting is not the past but in the future of every bright eyed young child. So take a kid hunting, they will never forget it the rest of their lives, a experience that no drug or anyone else could ever offer.

As the day turn to night and the trains roll through Union Station in Montgomery, thousands of BUCKMASTERS members gathered to here a free concert by Eddie Reasoner, who wrote the BUCKMASTERS theme song but where else in a tree stand. Eddie Reasoner also teamed with singer/actress Rebecca Holden from Knight Rider and General Hospital, to put a great first half of a concert on.

Then the night got eve hotter, when country music star and outdoorsman from Texas hit the stage. Clay Walker had the crowd going to the end of the night, how else to end a day on such a great night.

WORTH A WEEKEND For me it was a solid 8 hour drive and hotel stay for Friday and Saturday night and a 10 hour drive back in the ran and Sunday traffic. Worth every bit of the traveling and time, weather you have been before, or have never gone before. Some of you may think it is too far for you to go, it would be a shame to say you have never been.

What I have written and the pictures I have taken does not do the BUCKMASTER EXPO justice, because of the feeling you get as this is a sign the season it just about to begin. Know what I mean.

Hope to see you in the woods or on the water. Horntagger!