Just some of the people and things I will be covering at the 31st Annual Fan Fair 2002.

ARCHERY A COUNTRY MUSIC TRADITION
By: Allen “horntagger” Morris Archery and bow hunting is very much alive in the souls of country music and country music artists as the first ever Fan Fair Celebrity Archery Shoot-Out that took place in Nashville, Tennessee on June 14th of 2002.

As Fan Fair representatives ask country music artist Andy Griggs if he would consider hosting a golf tournament, he said no but would be willing to host an archery tournament. Archery is an American tradition and is strong in this Monroe, Louisiana native as his first arrow was released and found its mark.

Master of ceremonies for this event was country music artist, and host of Bushnell’s Secret of the Hunt, Dave Watson who has great respect by the hunting community and country music artists worldwide. Dave Watson did a great job telling the hundreds of fans on hand watching, how the archery shoot-out was to take place, and how this compared to hunting, and some of the great benefits of archery and hunting and how it is American heritage.

With each release of an arrow by the fans favorite celebrity, applause and cheers could be heard as the arrow found its mark more than once in the shadows of the Adelphia Coliseum and the skyline of Nashville, Tennessee.

Andy Griggs took first place followed by Tracy Byrd, Neil Thrasher, Brad Paisley, Gary Levox, Rusty Tabor, Kris Marcy, Blake Shelton, Joshua Ragsdale and Darryl Worley. This dedicated group of country music artists and bow hunters with the mutual desire to ensure that archery and bow hunting and the ideals of wildlife conservation will survive, expand and flourish to be shared, enjoyed and passed onto future generations to come. Which was more prevalent as Rusty Tabor, Darryl Worley, Andy Griggs, Blake Shelton, and Gary Levox made it a point to sign autographs for the young boys and girls that watched the archery shoot-out. All of the country music artists on hand put on a great archery exhibition for hundreds of fans on hand and should gain the respect of every hunter.

Whenever a celebrity that is in the spot light shows and tells the world, that he is a hunter, that celebrity is making this American heritage that much stronger and each celebrity on hand earned my respect in doing so. As with Tracy Byrd during my interview with him just before the archery shoot-out took place, he said. “I am a bow hunter”

That split second right before the releasing of each arrow made me very proud to be able to witness that hunting has some great ambassadors for a long time to come. That was confirmed when talking with Andy Griggs who hosted this archery shoot-out after the event and he said, “It will only be bigger next year.”

Also another great ambassador of hunting, was country music artist Chad Simmons, as he took time and made it a point, out of his very busy schedule just to talk hunting. When it comes to hunting Chad Simmons is the Ted Nugent version on the country music side and hopes to get involved in the archery shoot out next year.

Hope to see you in the woods or on the water. Horntagger 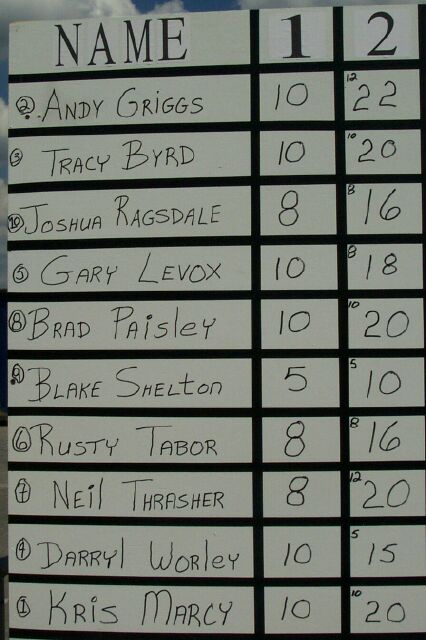 No rookies in among this group of Bow Hunters as the practice was over and the scores started adding up. 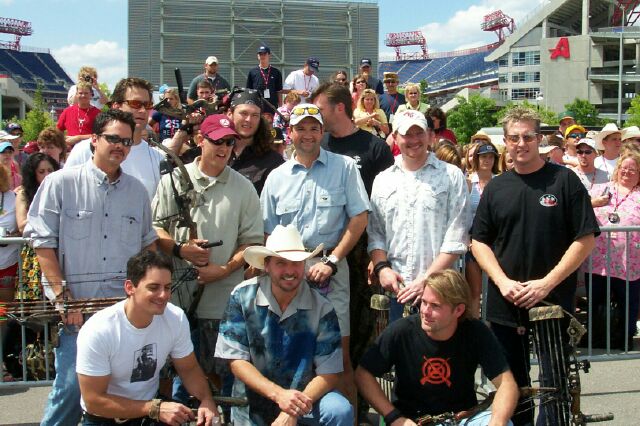 When a line up of celebrities like this stand up and let the world know that the heritage of hunting is strong, and bow hunting is a sport that all should enjoy. They all should congratulated for their effort. Back Row - Kris Marcy, Blake Shelton, Darryl Worley Middle Row - Joshua Ragsdale, Neil Thrasher, Tracy Byrd, Rusty Tabor, Gary Levox Front Row - Brad Paisley, Jeff Carson, Andy Griggs