Just in case you don't get it. Their is only one step between the Soil and your Deer. Videos are about Soil health in farming but this rolls directly into habitat management for wildlife. Why we habitat managers for wildlife should not be disking your food plots. 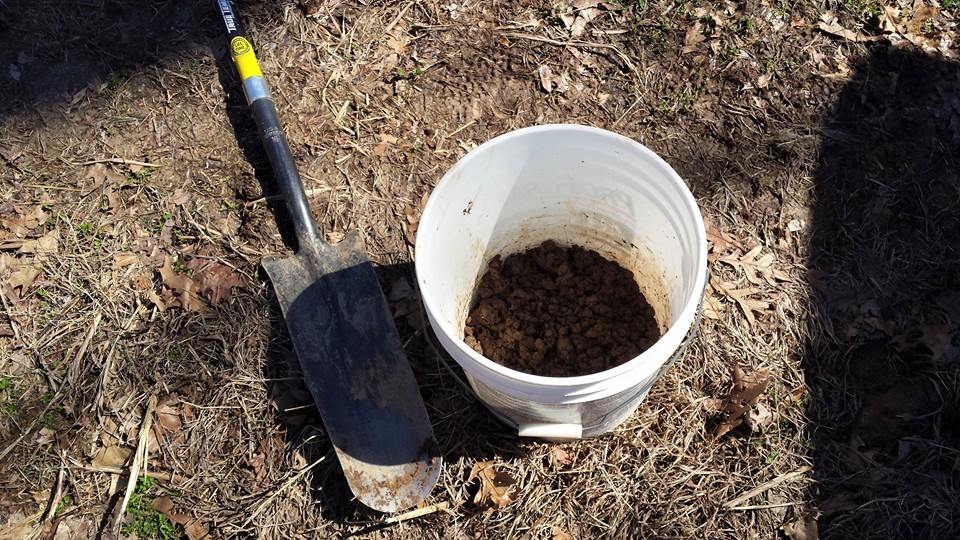 Soil Comparison Results over time for each area

What use to be a must for food plotters is starting to change the landscape here in Missouri and across the nation. Most serious food plotters and wildlife land managers have planted grains, legumes and brassicas planted in August for late season food plots. The deer will hammer these food plots when the first frost really hits and then when the acorns come to end like they are right now, they will mow down a food plot as a primary food source.
But farmers are changing the landscape and you are starting to see them on the side of the road if you travel to Cape Girardeau you will see the farmer has cover crops between Notre Dame High School and Wal-Mart on Route K. Those fields where corn and soybeans and now have cover crops planted in them.
For farmers cover crops are planted between the cash crops seasons which give the soil cover during the winter months. The information on cover crops are common place on the internet for farmers today.
Why Grow COVER CROPS
The studies have shown that these cover crops also known as GREEN MANURE help protect the soil, from erosion and water runoff, and wind and water quality, reduce chemical cost by suppressing weeds, and increase yields and bonus for us hunters it increases forage availability when it is at the lowest time of year and improve the wildlife habitat during the hard winter months.
From professional farming community - Cover crops are an important part of an organic crop rotation and are vital for improving and maintaining good soil health. Research has shown that cover crops can:

In a 3rd year in a row survey of 1,200 farmers across the county revealed that cover crops boosted corn yields last year by an average of 3.66 bushels per acre or 2.1 percent. It also increased soybeans by an average of 2.10 bushels per acre or 4.2 percent this was the third year in a row of additional yield increased following cover crops. But in some cases, increase of 10 percent in yield was also noted.
Now Missouri is behind the curve because in March of 2016 - The Missouri Department of Agriculture has announced it will receive $2.4 million to expand the use of no-till and cover crops in Missouri as part of USDA’s Regional Conservation Partnership Program (RCPP). The funds will be used to assist Missouri farmers and ranchers plant 20,000 acres in cover crops annually.
When you look at Iowa in 2009 fewer than 10,000 acres where planted in cover crops and in 2016 over 300,000 acres planted in cover crops and 1 in 4 farmers in Iowa are now planting cover crops.
What does this mean for whitetail hunters?
This is a WIN WIN for farmers, landowners and hunters.
http://crops.missouri.edu/covercrops/ is a great resource to start looking into a COVER CROP after your corn and soybeans next season. If you are a hunter that hunts on a farmer ground you might want to pass this information on to them.

​With the lack of acorns in some season that occur in Missouri your late season food source become a key factor in management of you whitetail deer herd on you property and also can increase your chance for late season hunting.

Turnips are just one type of last season food source. They love them green tops after the a few days have heavy frost 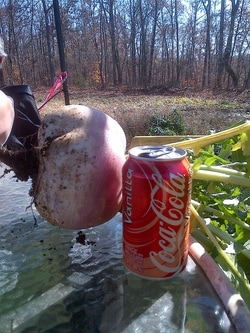 Apples another great source of food in the early fall 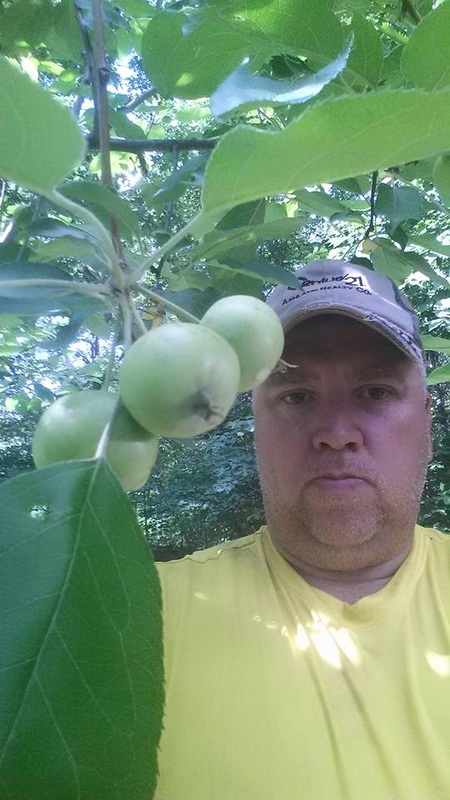 I recommend that you look at Century Farm Orchard for apple trees. They sell hundreds of varieties of heritage/vintage trees. Apples that you can't buy in a store and are much better apples. Their website lists trees by ripening times, so you can have trees that drop apples in June, to get deer coming early, and trees that drop apples through hunting season. If you want to see apples in the next 10 years, buy grafted trees. Standard size trees take years to produce an apple. I recommend semi dwarf trees.

They tell me they have plenty of Va. Beauty and Arkansas Black available. So, I order 4 of each.

They did recommend Hewes Crab for a pollinator as it blooms over a longer period of time and produces better fruit. I order two of each grafted.

Also they tell me if this year's trees are like past years, they will be much larger than 1/2" in caliper.

No Deposit and going to mail an invoice in October.

Shipping estimated of $16 and $20 for the entire shipment.

Order came in planted them Thursday before deer season and they came with planting instructions. 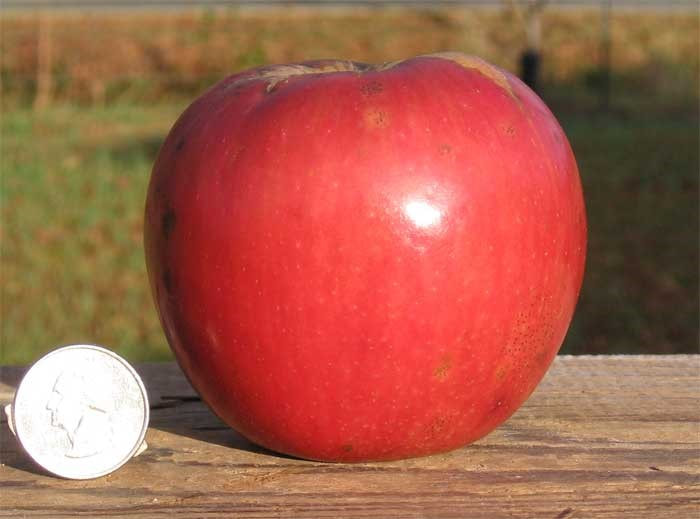 The original tree grew before 1820 in what is today Carroll County in southwestern Virginia. The name implies an attractive apple, but it is also an excellent eating and dessert apple. In 1914, F. H. LaBaume, a Virginia farmer and fruit grower, wrote to the United States Department of Agriculture saying of the Va. Beauty; “ It has a distinctive flavor all of its own that clings to the palate and lingers in the memory for a lifetime.” The tree is known for producing wide branching angles, a trait that aids in producing proper tree structure. Fruit is medium to large with a glossy red or purplish color. Its flesh is greenish-yellow, fine grained, tender, juicy, sweet, and mildly subacid. Ripens in October.

Arkansas Black: Originated in Arkansas around 1870. This apple is a good keeper and can best be described as “hard as a brick”. The tree is quite disease resistant. The fruit is a reddish-purple, almost black, with a hard, yellow, crisp flesh. The fruit begins ripening in late October and can be stored well into the winter months. 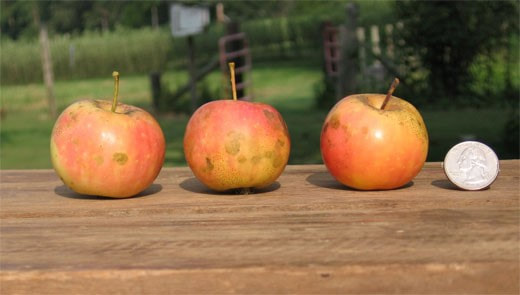 Hewes Crab (Virginia Crab): This apple originated in Virginia, most likely during the early 1700’s. Its taste is unique. In most of the south, it is the finest cider apple. It makes a dry cider that is usually mixed with other varieties. Both George Washington and Thomas Jefferson knew this apple’s qualities quite well. The fruit is very small, green with a dull red, and a flesh that is firm and acidic. Ripe in September.

2018 Apple Orchard
Always trim my trees the beginning of March and Fertilize at the end of March.

Dunstan Hybrid Chestnut - Planted ​November 7th, 2017
Sometimes future is more important than present, Bowhunting interrupted, drought is over, seller contact me, had to get it done as the rain moves in. But, the Dunstan Hybrid Chestnut Orchard is planted. Trees come from 2 miles away from Castor River Chestnut farm. 8 - Two year old trees planted, and getting rain, temporary cages keep deer off till I finish around them this spring.

March 14th, 2018
Cleaned up my chestnut grove, that dozed last June, and I planted last November, put some compost dirt from raised garden from home that I removing and covered with landscape fabric, they all appear alive but little early yet.

April 25th, 2018
Awesome at least 6 of 8 chestnut trees are alive from planting last November. Two have come out by the roots just have to see how those to progress before trimming main stem or best stem growing.

Don't have a local source for Chestnuts - www.chestnuthilloutdoors.com

​July 29th, 2018 -
​Well I got my food plots planted today, trying to beat the rain, and the next two to three days of rain. Soon as I got home it had started to rain back at land, always good. Another cool thing was I got to see 3 chicken size poults fly out of my food plots with a hen, that’s always good, with the amount of bugs on ATV and me I can see why, lots of dusting spots also.
T-Raptor Hybrid Forage Brassica
Pasja Hybrid Forage Brassica
Barkant Forage Turnips
Appin Forage Turnips
Crimson Clover
Sugar Beets
Waiting on local dealer to get Fridge Triticale was hoping for last Friday but did not happen.
Used the Poor Mans, cultipacker today also, my steel bedframes drags they are 11 years old now, have seen better days but you can’t find them anymore.

For you corn and soybean food plotters. This photo was which was shared to me by farmer is perfect example of COVER CROPS interseeded. Wave of the future. 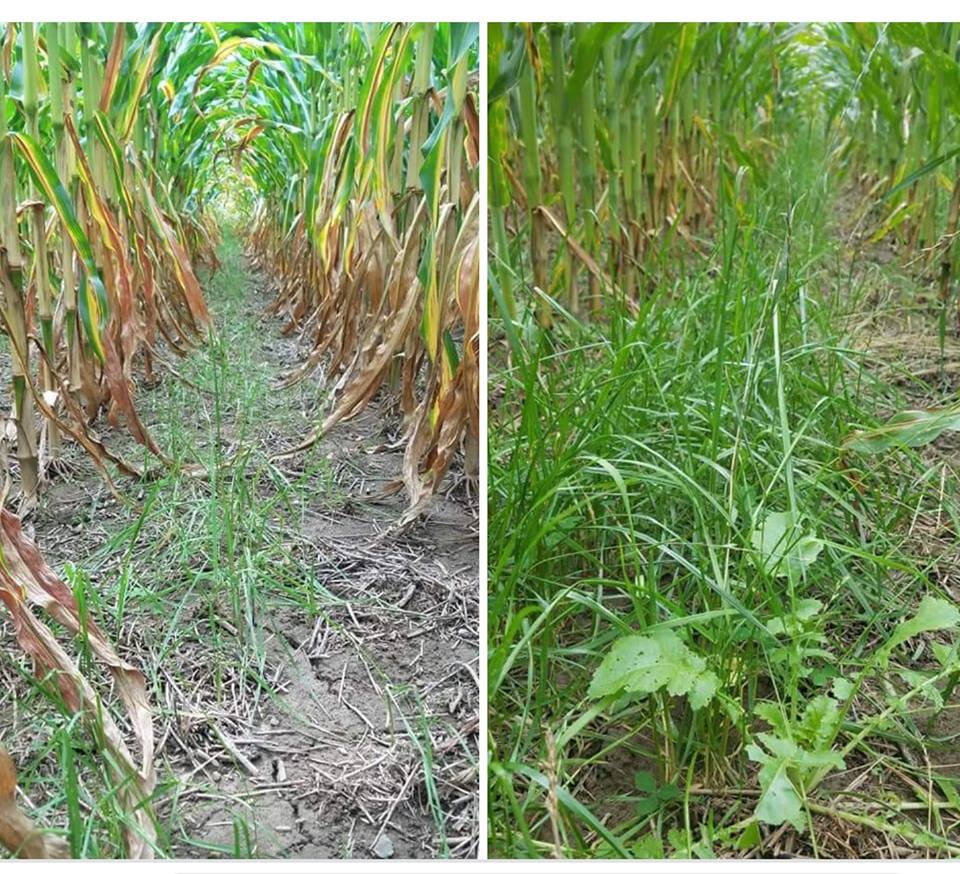 Articles in cattle and agriculture industry, that make up some great stuff for food plotters.

Cover cropping and grazing study built soil fast
Food Plotters keep open mind and think outside the box. No use to reinvent the wheel, just think of the cattle as a very big deer.​

If your a food plotter, this helps you keep track of rain fall on your food plots, been using it for about 3 years. 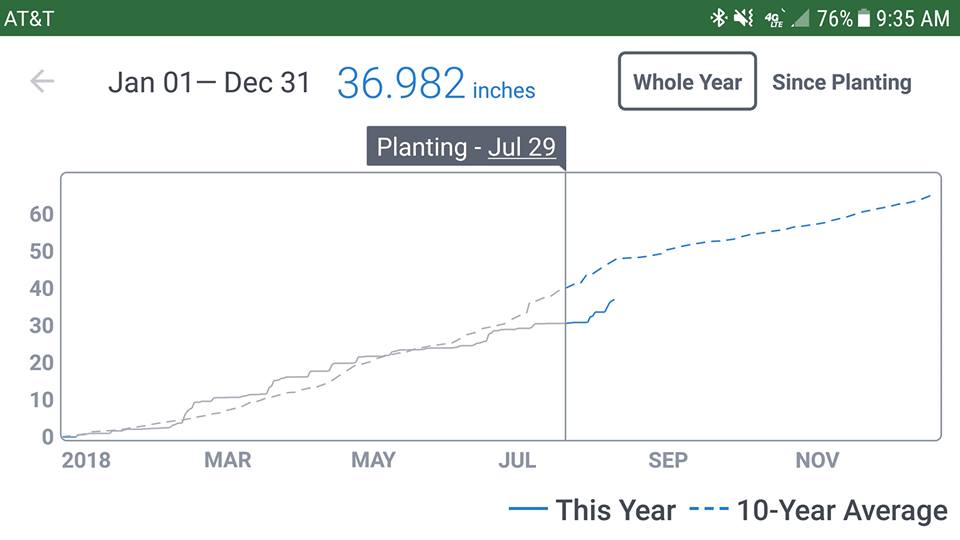 Cover Crops, a Farming Revolution With Deep Roots in the Past